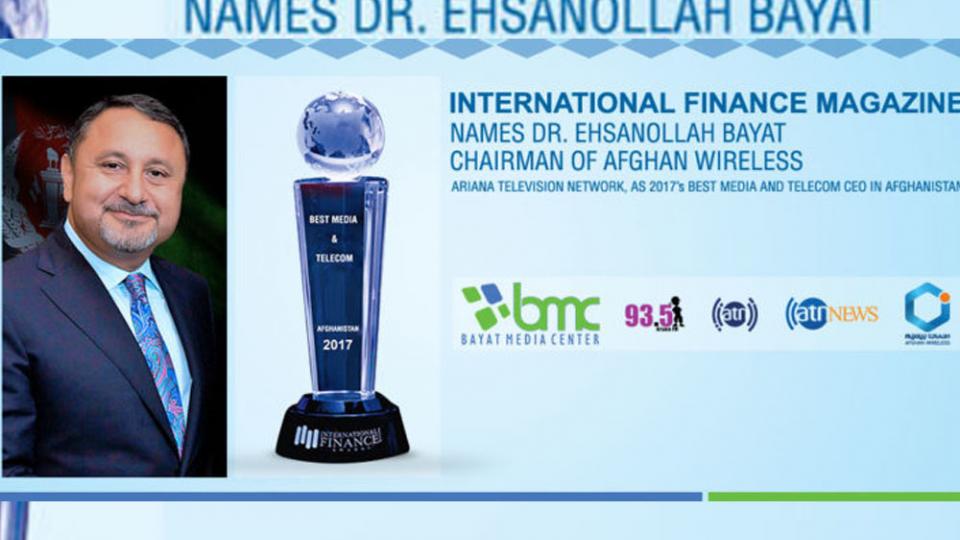 International Finance Magazine (www.internationalfinance.com), which is published in 185 countries, provides the world’s leading executives with timely and vital information, analysis and insights about developments within global financial markets. IFM bestowed its most prestigious award upon Dr. Ehsan Bayat, in recognition of his historic position as the founding executive of Ariana Television Network—which broadcasts award winning programming to 25,000,000 Afghans, and for establishing Afghan Wireless—Afghanistan’s first wireless communications company.

AWCC provides world-class 4G LTE, 3.75G+ and 3G Voice, Data, Internet and My Money Mobile Payment Services to more than five-million subscribers who live in all 34 provinces of Afghanistan. Afghan Wireless—together with its community of dealers, agents and representatives, has employed well over 100,000 Afghans.

Afghanistan’s wireless communications sector—the sector which was founded and built up by Dr. Bayat and Afghan Wireless—is the largest and most profitable segment of Afghanistan’s

economy. Today, Afghanistan’s wireless communications sector provides the Afghan Government with more than 25% of all tax revenues collected in Afghanistan.

In 2017, both Afghan Wireless and ATN demonstrated their continuing commitment to technological innovation. In May 2017, Afghan Wireless launched its 4G LTE Service—the only 4G LTE network available in Afghanistan. The Company is also rapidly expanding its Mobile Payments and Valued Added Services (VAS) initiatives.

“I’m honored to be selected by International Finance Magazine as 2017’s Best Telecom and Media CEO,” said Dr. Ehsanollah Bayat, the Chairman of Afghan Wireless. “Success is a team effort, so this award is also a recognition of the loyalty and hard work contributed by everyone at Afghan Wireless, ATN, and the entire Bayat Group; their commitment has made our success possible.”

“All of us at AWCC, ATN and The Bayat Group are continually humbled by—and proud of—the opportunity we’ve been given to serve Afghans,” Dr. Bayat said. “We are proud that Afghan Wireless, ATN and every company that is part of The Bayat Group are enterprises built by Afghans for Afghans. And we look forward to serving the people of Afghanistan, to contributing to our nation’s growth and progress, for many, many years to come.”

Launched in 2005 by Mr. Ehsan Bayat, Founder of ATN and the Chairman of The Bayat Group (www.bayat-group.com), ARIANA Television (ATN) and Radio Ariana 93.5 are the largest private media channels in Afghanistan, covering 33 of 34 provinces and reaching over 20,000,000 Afghans.

ATN provides the Afghan Nation with a “Window for a Better Tomorrow”, by exposing our radio and television audiences to the best of international arts & culture and expanding opportunities for Afghan writers, producers, actors, and directors.

Along with our affiliated enterprises – The Afghan Wireless Communication Company – and The Bayat Family Foundation, we employ and train more than 6,500 Afghans throughout the country and we are proud to have Afghans building and broadcasting ATN / Ariana 93.5 / ATN News / ATN News FM for all of Afghanistan.